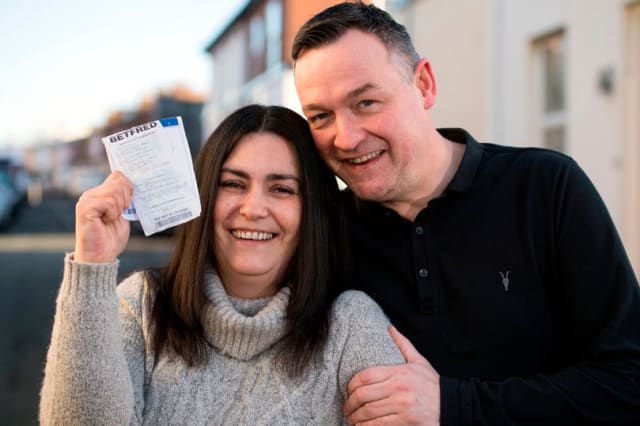 A couple narrowly avoided missing out on a New Year windfall after retrieving a winning lottery ticket worth £66,000 from the bin.

Mum-of-two Joanne Joynson, from Merseyside, went to her local Betfred shop on New Year’s Eve and was amazed to discover the losing £3 Spanish Lottery ticket she had thrown away three days earlier was in fact a winner.

She raced the short distance home to rummage through the wheelie bin and 15 minutes later was back at the bookies clutching the ticket.

Joanne, 37, told the Liverpool Echo : “It wasn’t so bad because the bin men had been to take away the Christmas rubbish so there was only one plastic bag in there so I found it quickly enough.

“I was shaking when I went back to the shop and they had to give me a cup of tea to calm me down.”

She added: “I go in Betfreds every day and have a go on the Spanish or Irish lotteries, the 49s or the goals galore coupon. I have won bits before but never ever anything like this.

“We went to the pub as usual that afternoon to watch the Liverpool game against Manchester City but I just couldn’t concentrate having won so much.”

Joanne, who works as an assistant tax officer, is now planning a summer wedding to fiancé of 15 years, car salesman Dyllan O’Connor.

She said: “First thing I did when I saw Dyllan was to remind him he had proposed 15 years ago and that we could now afford to get married.

“I’m absolutely made up and even this morning when I woke up I was pinching myself.

“I have always wanted to get married but we’ve never had the money to do it until now.”

Her losing ticket proved a winner as part of a Betfred 10-week “cash giveaway” promotion where all the losing lottery tickets from the 11 lotto games go into a weekly draw meaning the tens of thousands of punters who missed out are in with a chance of picking up £1,000 or £5,000 consolation prizes.

But not all the cash prizes were claimed – and the prize fund rolled over into the £66,000 won by Joanne on December 31.