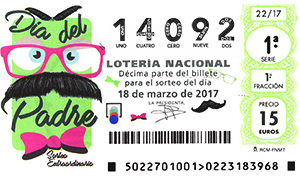 The Dia del padre lottery of  (Fathers Day Lottery 2017) of Spanish Lotería Nacional is coming up soon and now is your time to buy tickets online, ticket sales close 2-3 days before the actual draw and online tickets are limited. The first prize of this drawing for Father’s Day has corresponded to the number 91885 last year. The most fortunate communities in this raffle last year were Toledo and Logroño .

The second prize , endowed with 250,000 euros to the series, corresponded to the number 7767 last year. Barcelona, ​​Seville , Madrid and Tenerife have been the places where the second prize was mostly won last year. Refunds were for numbers finished in 5, 4 and 6.

The Spanish Lotería Nacional is one of the most popular games of chance in Spain and a century-old tradition.

Unlike other lotteries, the National Lottery allocates 70% of its profits to the winners.